About 15,000 years ago, the ice age ended and the warming started. And then, this area became livable for human beings. The environment changed and provided rich nature and food.

The Jomon period lasted for more than 10,000 years because of their living style with nature and no war. Farming and livestock were major in the world, but people in Jomon area hunted and gathered for their food. Rich nature provided enough to eat.

If they started farming or livestock, which caused wars for land and slaves in the other areas of the world, the Jomon period wouldn’t last this long.

The human beings started to live in this area from 9,000 years ago. The Jomon period existed 3,500 years before the pyramids in Egypt.

All of these potteries on display were excavated in this area. Most of them were used for cooking.

“Cord-marked” pottery is characteristic of this period. They are different from their size, patterns, and designs depend on the phases.

These stones were used for cutting and grinding nuts or meat. 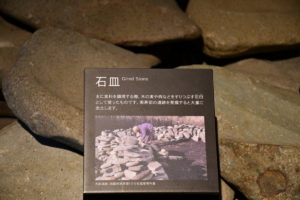 Can you tell which one is male? 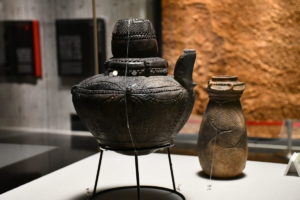 This is the place for food preservation. It’s just like a fridge for us. The storage pits could keep the suitable temperature for food. Food didn’t get frozen in winter as they kept food buried in the ground. This sample is the actual surface of excavated spot. It was 3 meters in depth. 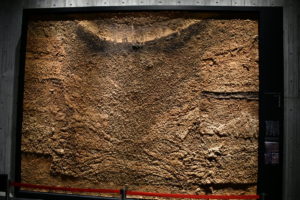 This was designated as a national treasure in 2007 for the first time in Hokkaido. This is the largest hollow clay figure in Japan and is very good condition.

Clay figure is known for figuring female body but this one isn’t sure about that. Most of clay figures in Middle Jomon were designs of pregnant female body. However, if you look at this clay figure, it has mustache, broad shoulders and hairy body. This clay figure is very mysterious. They say that this is a spiritual creature beyond gender.

Things to do in Hakodate